What is this article about?

This article is an introduction to some of the projects which have been developed by the SciArt Lab around topics related with digital musical creation.

In this post I will summarize part of my hands-on experience based on the intersection of DIY electronics, MIDI controllers, and the development of new tools (coded in Java, Groovy, Processing, Javascript) in combination with existing software such as Ableton Live.

This is an on-going exploration, so follow us on Twitter and keep updated in the near future.

I can summarize the current projects of the SciArt Lab as a set of fun experiments.

We are exploring the potential of applying Artificial Intelligence techniques and software development to create programs which are able to write and play their own music.

Take a look of our first experiments, watching our videos of cellular automata with emergent properties for music composition.

Each cellular automaton is able to compose its own music based on simple rules, evolving while it plays synthetic instruments in Ableton Live or external devices through MIDI events.

Alda-tabs is the first Domain Specific Language for Guitar Players in the Java Virtual Machine. This piece of software can help guitar players to “execute” their music notes in the JVM, write songs and get audio feedback with basic tab syntax. You can read more about this in this article.

Take a look of the potential of Alda-tabs with chords and arpeggios listening this example (code also provided):

A couple of years ago, when I was working as Visiting Researcher at the Critical Making Lab (University of Toronto), I discovered how a humanistic-based approach to DIY electronics, coding and making could change forever my conception on research. That experience helped me to see the importance of hands-on learning and the role that tangible objects could have for theoretical or intellectual explorations.

Currently I am working on a prototype of a physical MIDI interface to control digital instruments directly from a guitar fret. This same concept will be explored with different objects and materials (conductive or not) in the following months.

The idea is to go beyond the keyboard as the standard digital music interface and build physical MIDI controllers with wood, cardboard, fabric, etc. More details about this project will be published soon.

In the meantime, I have been also testing some libraries of Javascript for sound synthesis, and playing around with p5.js to develop the foundations of SoundBox, an experimental digital environment for synthetic music creation. Basically, the idea with this tool is to transform a human voice or an instrument (through a microphone) in a MIDI interface. Right now, it basically detects the fundamental frequency of the microphone’s sound signal, allowing the user to transform a continuous signal in a set of discrete notes. It also parses that information and reproduces the played sequence in Sin Oscillator.

It is a very straightforward prototype with troubles with some harmonics, but it has been a good experiment to learn about how these issues work. Let’s see, but maybe SoundBox is the starting point for something more sophisticated.

One of the research interests of the SciArt Lab is information visualization in unusual ways. I always was fascinated about synesthesia and lately I have been testing visual approaches to music. The idea with some of the prototypes I have been working in is to map MIDI inputs both with physical visualizations (i.a. LEDs) and computational ones.

In this second category, I have been testing the possibility of creating my own 2D graphics with Processing and SVG and animate them while controling their movements and shapes directly from external MIDI inputs. This is one example of one program/animation that I have implemented recently:

In the previous example, an animation is created dynamically in Processing while the behavior of an animated cartoon responds to the inputs received from an external DIY electronics device. Both the graphics and the sound are produced by the orders received through MIDI inputs.

I have always liked music. I started writing songs with a keyboard as a kid and continued with a guitar when I was a teenager. Nowadays, I enjoy playing several kinds of instruments. Besides the keyboard, my acoustic guitar and my wife’s classical guitar, I have two harmonicas, some flutes, an ocarina, an ukulele and a guitalele.

Recently, as part of the open-ended exploration of the SciArt Lab, I have been writing also some digital music. I call them postynaptic symphonies because I found interesting the cognitive experience of listening that sort of unpredictable songs.

I have published some postynaptic symphonies in SoundCloud:

More information about the evolution of my music-related projects will be coming soon :)

Why is so easy to code guitar songs with alda-tabs?

How can I create complex digital music with alda-tabs?

How is the alda-tabs syntax?

What I am gonna show you here is the easy and super simple alda-tabs syntax:

In 10 minutes you will be able to write songs in a text editor and listen the result in your speakers.

Imagine that you want to play all the strings of the guitar, one after another:

This example is a regular guitar tab in which all the strings are played sequentially with one hand and in which there are not fingers of the other hand pressing the fret.

So the fret number would be 0 in the six positions of the sequence.

How would we write this in Alda syntax?

In Alda syntax we would need to know the note equivalents of each position. And in addition:

How to do it in alda-tabs?

Remember that alda-tabs is based in the simple concept of a tab. Basically, the notes of a guitar can be defined by numeric combinations, a number to identify the string (from the first at the bottom to the sixth at the top) and a fret.

To write a note in alda-tabs you only have to write ta followed by the string number and the fret number.

With alda-tabs we can write the same sequence that we have previously expressed in Alda. But this time we don’t need to know which note we are playing, we only need to write the tab, the position of our finger considering the string and the fret:

Take a look now of the fretboard:

If you want to play the first note C, according to the graphic displayed above, you don’t need to know the octave, you just will pick the string 2 in the fret 1: ta + 2 + 1.

You can also modify the duration of a note adding a character at the end. For example:

What does it mean? If you don’t specify a duration, this will be whole beat (W). You can also play the note during half beat (H), double (D) and quarter (Q). Those note durations will be proportional to the tempo of the score. For example, the following two sentences are not the same:

Play with these combinations to see the difference. For more complex timing, check the advanced tips bellow.

Imagine that rather than a sequence of notes you want to play a chord. A basic example would be playing all the open strings at the same time:

You can do this in three ways:

As you can see, the chord notation is just a Clojure function c with seven parameters, the fret of each one of the six strings and the duration of the chord.

For example, the D chord would be 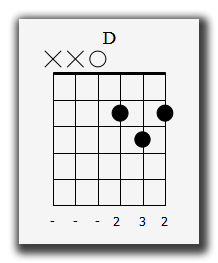 You can also use the chord notation to play single notes. For example, the two following sequences are exactly the same:

You can play tabs with specific durations, in seconds or milliseconds by using the function t. In this case you should write the number of the string, followed by a dot and the fret. Add the end, you should express in String format ("") the duration you want.

You can do the same with your chords:

How can I install alta-tabs?

You can start exploring the potential of alda-tabs with chords and arpeggios with the example #01:

Example 2: The sound of Pi

You can also see how beautiful songs with multiple instruments can be written with Alda with the example #03: